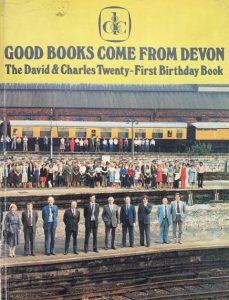 This article is an excerpt from the David and Charles Author Guide, a document we share with all our potential authors that explains what it means to work with us and what to expect in the publishing process.

David and Charles (D&C) was founded on 1st April 1960. That the founders, David St John Thomas and Charles Hadfield, chose April Fool’s Day to incorporate was no accident and entirely fitting with a somewhat eccentric approach to the early time of the company.

Initially a part-time hobby, the business had its first official office premises in 1964 (a hut in Thomas’s garden) before moving to a more permanent home 12 months later – occupying three rooms above Newton Abbot Railway station.

The early publishing years featured niche and local-interest titles and the beginnings of what would become a mainstay category for D&C, railway and transport publishing.

As the company grew in size and confidence, so the list expanded. No category was off limits and the current archive of over 3,000 titles are a testament to many prolific years of great books. A common thread throughout the company history has been innovation. In the earliest days this was driven by scarcity of funds, but as the company grew it evolved to an entrepreneurial spirit that drove the company forward. David and Charles were innovators in advertising and promotion, at one stage ran their own bookshop in London, were early pioneers in colour illustrated books and were ambitious to build an international business, founding David & Charles Inc, a Vermont company, in 1972.

Thomas identified the many benefits of selling books directly to readers and so purchased the Readers Union Book Club business in the late 1970s. This ran alongside the publishing company until market conditions forced its closure in 2008. That the benefits of this business model remain an important and oft-debated topic in publishing houses today is a testament to his vision to pursue this over 40 years ago.

A period of changing ownership in the late 1990s ultimately ended with the sale to American company, F+W Media, a business with book, magazine, event and other interests. This coincided with a period of significant industry change; the launch of the kindle and growth of social media, online video through YouTube and, of course, the establishment of Amazon as the dominant global retailer of books online.

The company changed significantly during this period and, while the industry challenges were a significant headwind, it was a time to explore new opportunities and revenues in areas such as ecommerce, online media and video.

Our most recent chapter began in July 2019 when the current management team, with the support of external investors, purchased the business from F+W Media.

Posted in Blog and tagged history.

We use cookies on our website to give you the best experience by remembering your preferences and repeat visits. By clicking “Accept”, you consent to the use of ALL the cookies.
Cookie settingsACCEPTREJECT
Manage consent

This website uses cookies to improve your experience while you navigate through the website. Out of these, the cookies that are categorized as necessary are stored on your browser as they are essential for the working of basic functionalities of the website. We also use third-party cookies that help us analyze and understand how you use this website. These cookies will be stored in your browser only with your consent. You also have the option to opt-out of these cookies. But opting out of some of these cookies may affect your browsing experience.
Necessary Always Enabled

Any cookies that may not be particularly necessary for the website to function and is used specifically to collect user personal data via analytics, ads, other embedded contents are termed as non-necessary cookies. It is mandatory to procure user consent prior to running these cookies on your website.